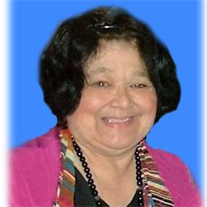 She was born on Thursday, January 11, 1951, in East Saint Louis, IL, the daughter of Jessie and Virginia (nee Blayney) Garcia.

She was a member of St. Nicholas Catholic Church, Pocahontas, IL.

Born at E. St. Louis, IL; graduated from E. St. Louis Senior High School in 1969. She worked several years at Fact Photo Finishing, St. Louis, MO. Then worked for the Department of Defense as a Jet Fuel Analysist at Jefferson Barracks, MO, before becoming disabled in 2004. She loved to cook; always looking for and trying new recipes. She followed and helped her granddaughter Emily in the Miss Teen Illinois Pageant (Miss Teen USA Pageant). Emily won Miss Congeniality in 2014-2015.

Funeral Mass will be at 10:00 AM on Friday, February 24, 2017, at St. Nicholas Catholic Church in Pocahontas, IL., with Father Scott A. Snider, Pastor, officiating.

Interment will be at 2:15 PM on Friday, February 24, 2017 at Jefferson Barracks National Cemetery in St. Louis, MO.

Memorial contributions may be made to St. Nicholas Catholic Church or Family.