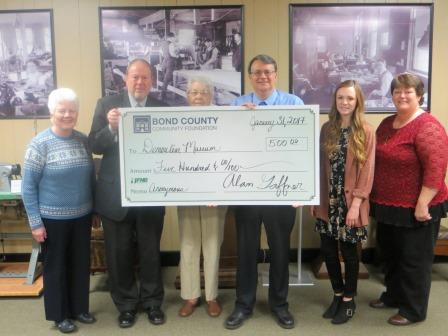 The DeMoulin Museum in Greenville has received $500 from anonymous donors through the Bond County Community Foundation.

The check was presented Tuesday afternoon during a ceremony at the museum.

Curator John Goldsmith expressed appreciation for the donation and said the museum’s popularity could lead to changes.

Goldsmith said the traffic at the museum continues to grow and artifacts are donated to the museum on a regular basis. Several options concerning the museum’s growth are under consideration.

Greenville Mayor Alan Gaffner, who serves as chairman of the foundation, complimented the museum’s board and volunteers for preserving the history of DeMoulin Brothers and Company, which is celebrating its 125th anniversary this year.

The museum is separate from the factory as a not-for profit entity, and is located at 110 West Main in downtown Greenville.

Since opening in March of 2010, the museum has drawn 6,442 visitors. Last year there were 861 visitors. Goldsmith said at least 75 percent of them came from outside Bond County. Over 20 tour groups visited the museum last year.