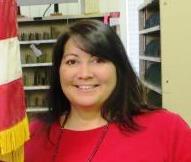 Lisa Mena had been the officer in charge at the Greenville Post Office.

She replaces Lynn Todt, who was transferred to the Highland Post Office as its postmaster in November of last year.

Mena, who lives north of Greenville with her husband, joined the Greenville office in June of 2016.

Upon Todt’s transfer Mena was appointed officer in charge at the Greenville Post Office after serving as post office supervisor.

Mena has a diverse background with the postal service and nearly 32 years of experience.

Click below to hear her detail her career with the postal service:

Mena officially became postmaster on February 18. She expects a new supervisor to be appointed in early April.