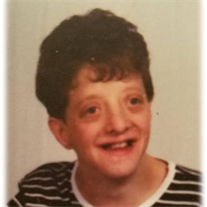 Ranii grew up at Murray Center in Centralia, IL where she was adored by many staff and fellow residents. As an adult, she moved to Clinton Manor in New Baden, IL, where she, again, was a favorite of many caregivers, nurses, staff and residents. That is also where, in 1991, she met her best friends, Gene & Tina (Ferrario) Huck who would become her guardians and forever family.

After becoming a part of the Huck family, Ranii moved to Ft. Campbell, KY, stealing the hearts of many new friends, and was an active member at St. Michael the Archangel Catholic Church. She later moved with her family to Highland, IL and eventually back to Clinton Manor, once again, loved by all who knew her. Ranii also attended day training at Community Link in Breese until retiring this past year.

Ranii was always a fighter having been given a prognosis of living only a few months. However, God had other plans for her. His servant, Ranii, was here to share His message of unconditional love. Ranii never knew a stranger, had a infectious smile and had a hug for anyone she met. Many lives were blessed by her being a part of them.

Ranii was also preceded in death by her grandpa whom she adored and loving grandma who often helped take care of her, Frank & Marcella (Webb) Ferrario, as well as her uncles, Michael Ferrario and Kenneth “Pancho” Feazel, her paternal forever grandparents and her biological uncle, Richard Wayne Chavez.

She is survived and dearly missed by her forever family:

She is also survived by members of her biological family:

Ranii’s family along with her friends and caregivers invite you to join them as they celebrate her life with a Memorial Service on April 1, 2017 at 9:30 A.M. at Clinton Manor Living Center in New Baden; Fr. Joseph C. Rascher, Pastor, St. Mary Catholic Church, Trenton, IL, officiating.

Memorials made be made to Clinton Manor for “Ranii’s Hope” a fund to encourage on-going educational opportunities for the staff and nurses who took such amazing care of and loved Ranii as their own.