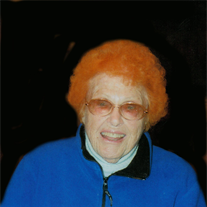 She was born September 29, 1919, in Highland, IL, the daughter of Irvin and Goldie Irene (nee Prewitt) Reinhart.

Ruth was born in Highland and grew up on the family farm northwest of Silver Lake. She graduated Highland High School. Following her marriage she and her husband operated the Reinhart family farm doing grain, dairy, and livestock. She lived her entire life on the farm until moving to Faith Countryside Homes in early 2010’s. She moved to Alhambra Care Center in 2016. She played softball in an “Over 40 league for many years. She had bowled until the age of 90+, and was inducted into the Greater Carlyle Bowling Hall of Fame in 2014. She enjoyed riding her 170 Honda Motorcycle, into her mid 80’s, Rode a bicycle and walked everyday. She was a long time Secretary during Madison County Fair and Had a “ZEST” for life.

A private Memorial Service will be held at a later date at Spengel-Boulanger Funeral Home in Highland, IL., with Rev. Tim A. Darmour-Paul officiating.

Memorial contributions may be made to Grantfork UCC or Highland High School Bowling Team.