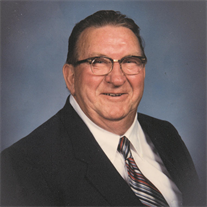 He was a member of St. Paul Catholic Church – Highland, IL.

Born and raised at St. Louis, MO. Attended St. Agnes Grade School, St. Louis. Served with the US Army, active duty during WWII and was in the 739th AAA Gun Batalion. Retired from Monsanto Co. , Queeny Plant, after 30 plus years. He and his wife raised their five children in St. Louis, MO; they moved to Highland, IL, in 1995. He enjoyed being with family.

Interment will be at Lake View Memorial Gardens in Fairview Heights, IL.

Memorial contributions may be made to Masses.