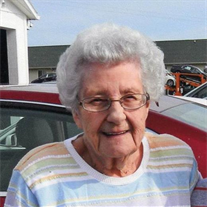 Elnoma Cleek Zucksworth left to be with her Lord on Wednesday, April 19. Elnoma was the daughter of Hubert and Pearl (Sanders) Cleek of Smithboro. She was born, June 21, 1930, in Hegewisch, Illinois a suburb of Chicago. She married Art Zucksworth on February 8, 1947. Art preceded her in death on January 19, 2015. They are the parents of Lois Ann Zucksworth (deceased), Ann Marie Zucksworth, Brenda (Ben) Eaton, Mary Tomko, Larry Zucksworth, and foster son, Bill Sexton (deceased).

While in the sixth grade, Elnoma was transplanted from city life to the small town of Hookdale. Her father had left Ford Motor Company to pursue farming full-time. She often talked about the transition from a large school to the one room school house in Hookdale. She was amazed that the store in Hookdale did not carry Kool Aid. It was a transition that she grew to love. She attended Mulberry Grove High School.

Later she became the first woman to be elected to the Mulberry Grove school board. She considered it a real honor to serve her community, and she worked hard to meet the needs of students, teachers, and parents. She served as board president and in other capacities. She also served on the Fayco board.

She was a long term member of the Tamalco Home Extension. She served over the years on the Tamalco election board and as a census taker.

She further served her community as the Tamalco Township Supervisor. She ran as the Republican candidate for the Bond County Clerk. Although she did not win the campaign, she considered herself a winner because of all the wonderful Bond county residents she met and befriended on the campaign trail.

Elnoma was a long time member of the Church of God. She attended the Vandalia Church of God when her health allowed. She later attended Columbus Baptist Church.

Like most farm women, Elnoma actively farmed in the fields, raised cattle, marketed the grain, and raised a family. She taught her children the benefits of hard work, to be a good listener, and above all, to love the Lord.

Funeral services will be Sunday, April 23 at 2 PM at Donnell-Wiegand Funeral Home in Mulberry Grove. Friends may call from 1 PM to service time.

Memorials may be made to the Noffsinger Cementery or the Columbus Baptist Church building fund at the Donnell-Wiegand Funeral Home in Greenville, or Mulberry Grove.