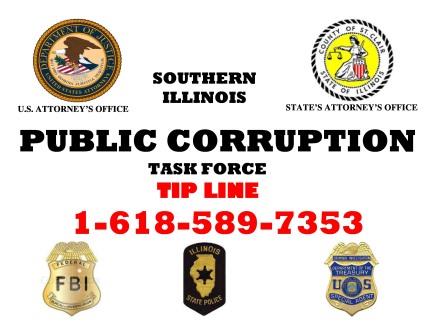 On Monday, April 10, 2017, Donald S. Boyce, United States Attorney for the Southern District of Illinois, and Brendan F. Kelly, State’s Attorney for St. Clair County, Illinois, announce the introduction of the Southern Illinois Public Corruption Task Force Tip Line: 618-589-7353. There will also be a billboard campaign in connection with the Tip Line.

Anyone with information concerning public corruption occurring within the 38 counties that make up the Southern District of Illinois is encouraged to call the Tip Line. Agents from the FBI, IRS Criminal Investigations, and Illinois State Police will professionally and swiftly investigate any information provided. It is only by citizens alerting law enforcement to public corruption that law enforcement can continue to investigate and prosecute those officials who have betrayed their oaths and the public trust by choosing to make public service into self-service.

St. Clair County State’s Attorney Brendan Kelly said, “Over the past five years, we have greatly increased prosecution of public corruption. With trust in our public institutions at an all-time low, we must do everything we can to protect it from those who would violate it.”

U.S. Attorney Boyce said, “Concerned citizens are the government’s biggest asset when it comes to exposing people who are abusing the public’s trust and misusing taxpayer money to line their own pockets. This initiative is designed to solicit the public’s help in identifying and targeting public corruption.”