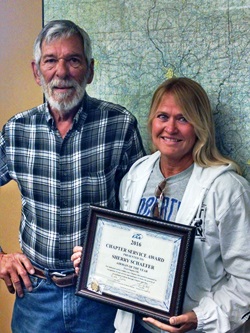 The Greenville Pilot’s Association recently presented its Airman of the Year Award.

Sherry Schaefer of Greenville was the recipient for the past year.

The award was presented by Association President Larry Frey, who said Schaefer’s dedication to the club served as a “spark plug” for the organization. He said she led the way in several projects this year.

2016 was the 50th anniversary for the Greenville Airport.