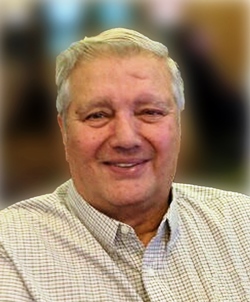 Mr. Simpson was born on July 27, 1940, in Chelsey, Massachusetts, a son of Fred and Norma (Carrillo) Simpson. He married Doris Twenhafel at Trinity Lutheran Church in Centralia on September 17, 1977, and she survives in Centralia.

Mr. Simpson was preceded in death by his parents – Fred and Norma Simpson; his father-and mother-in-law – Alvin and Edna Twenhafel; and a brother – Robert Simpson.

Mr. Simpson worked for Illinois Central Railroad, and later was the co-owner and proprietor of Fehrman Meat Processing. Chuck was also a co-owner of the Colonial Golf Course in Sandoval. He served on the board of directors at Farmers State Bank of Hoffman, the Clinton County Board, and had recently retired from the Clinton County Electrical Advisory Committee. Chuck also served on the Veterans Tribute Committee at Kaskaskia College. He loved spending time with his grandchildren, and enjoyed buying and selling cattle. Mr. Simpson was a member of Trinity Lutheran Church in Hoffman.