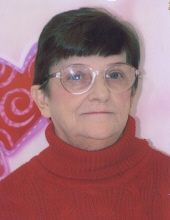 Donna R. Bone, age 77, of Greenville passed away Sunday, May 21, 2017 at Helia Healthcare. Funeral services will be conducted Wednesday, May 24, 2017 at 12 noon at Young Funeral Home. Interment will be in Robinson Cemetery, Pocahontas, IL. Friends may call Wednesday, May 24, 2017 after 10 AM at Young Funeral Home. Memorial contributions are suggested to The Greenville First Christian Church.

She grew up in Pocahontas and attended Pocahontas Schools. She lived for a time in Oklahoma but lived most of her life in Greenville, IL. She was member of the Greenville First Christian Church.
To send flowers or a remembrance gift to the family of Donna R. Bone, please visit our Tribute Store.