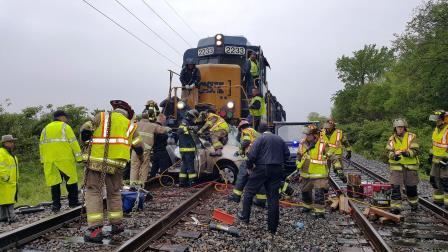 The driver of a car involved in a collision with a train last week has been identified. Captain Will Dimitroff of the Madison County Sheriff’s Office told WGEL the driver was 19 year old Ana Isabel Cantrell, of Pierron.

The Highland-Pierron Fire Protection District, Highland Fire Department, and Highland EMS responded to an unmarked train crossing on Farmlane Road near Veterans Honor Parkway on May 3 where a vehicle had been struck by a train. 19 year old Ana Isabel Cantrell was seriously injured in the collision, which pushed her vehicle a quarter mile down the track before the train was able to stop.

A medical helicopter was called to the scene, but unable to respond due to the bad weather. Cantrell was taken to St. Joseph’s Hospital in Highland with what highland-Pierron Fire Chief Steve Plocher called “potentially life-threatening injuries and severe head trauma.” Her current condition is unknown.

The Madison County Sheriff’s Department continues their investigation into the accident. Captain Dimitroff told WGEL that no charges have been filed against either Cantrell or the driver of the train at this time.