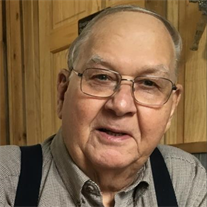 Jerry Thomas, the son of Curtis Alexander and Irene Lucille (Neumann) Bohannon, was born March 7, 1941 in Greenville. Jerry grew up in Greenville, attended Potts School and graduated from Greenville High School with the class of 1959. He then attended Greenville College.

Jerry served our country in the United States Army, enlisting on November 19, 1962. He was awarded the sharpshooter medal. Jerry was honorably discharged on October 31, 1968. Jerry and Nancy Ann Wise were united in marriage on May 27, 1966 at the Mt. Gilead Cumberland Presbyterian Church. They enjoyed 42 years together before her passing on April 17, 2008.

Jerry worked for over 35 years at the Olin Corporation in East Alton, Illinois. He retired in 2006. Mr. Bohannon loved spending time with his family and watching Cardinals baseball. He was a member of the First United Methodist Church.