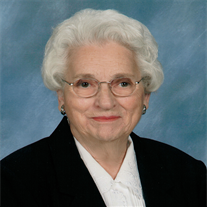 She was born October 07, 1924, in Highland, IL, the daughter of Richard and Velma (nee Hug) Spellerburg.

Born and raised in Highland, IL; graduated from Highland High School in 1942. After high school Betty attended Rubicom Business School, St. Louis. She worked at Southwestern Bell Telephone Company, St. Louis, in the Personnel Department and the Plant Personnel Department. She became Office Coordinator for the Illinois South Conference, Highland, IL, of the United Church of Christ in 1959 and held that position for 30 years. She retired in 1989. She collected Raggedy Ann & Andy Dolls; her mother had made them as gifts. She enjoyed family gatherings, Christmas with family, playing the piano, bird watching and eating out. In her early years she spent time at Klaus Lake. She and her husband travelled extensively in their motorhome and wintered in Arizona.

Funeral service will be at 10:00 AM on Saturday, June 03, 2017, at Spengel-Boulanger Funeral Home in Highland, IL., with Rev. Christopher W. Hill officiating.

Memorial contributions may be made to Faith Countryside Village Condominium Homeowners Assoc.; Evangelical United Church of Christ; or to the Paget’s Foundation.