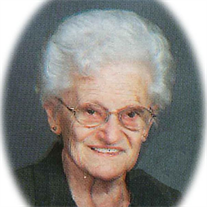 She was born on the family farm between Marine and St. Jacob, IL. She grew up there and graduated from Highland High School in 1944. She taught at country schools and later was a substitute teacher for Triad School district.. She attended SIU-E in E. St. Louis, IL and the main campus in Edwardsville. She taught 20 years at St. Paul School, Highland, from 1967 to 1987. In retirement she and her husband took numerous vacations. She liked collecting Lefton China, glass & ceramic hands. She enjoyed playing cards “Pinochle” with friends . She and her husband enjoyed dancing at Lindendale Park Ballroom. Her grandchildren and great grandchildren’s activities were always a priority.

Memorial contributions may be made to Saint Jacob United Church of Christ or American Cancer Society.