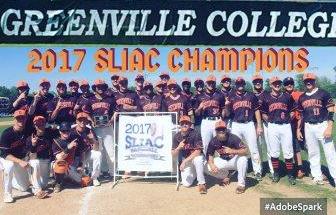 The Greenville College baseball team is in the NCAA Division III national tournament after winning the St. Louis Intercollegiate Athletic Conference Tournament over the weekend in Greenville.

The Panthers had to come from the loser’s bracket, losing their first game against Westminster 5 to 0. They beat Spalding, survived a 17 to 15 game against Webster, and then beat Westminster 11 to 7 and 8 to 6 for the national tournament berth. In the Webster game, G.C. led 10 to 1 and then fell behind 13 to 10.

The Panthers scored six runs in the seventh inning and one in the ninth.

Jesse Getz cracked two grand slam home runs for Greenville in that game. He ended up being the tournament’s most valuable player.

Also named to the all-tourney team from Greenville were Bryce Pearce, Klaiton Wolff and Travis Ralls.

The Central Regional in the national tournament is being held at GCS Ballpark in Sauget, IL. Greenville, 30-15, faces Birmingham Southern, 36-8, at 11 a.m. Thursday.

Birmingham Southern is seeded first in the regional out of six teams and Greenville is the sixth seed.

The regional extends through Sunday. This is the second time a G.C. baseball team has advanced to the Division III national tournament.