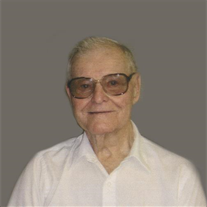 Richard was born in Pocahontas, IL; grew up in Highland, IL. He served with the U.S. Navy with duties in the Pacific Fleet during WWII. He had owned Moser Farm Supply, and he was part owner of Highland Building Supply. In 1967 moved to Golden Gate, FL. While he was living in Florida he was a home finisher for new construction. He and in wife returned to Highland in 2006. He was in the “Joker” Clown Unit with the Shriners at age 70. He loved entertaining children with his creative balloon animals. He taught himself to play the guitar and button accordion. He enjoyed entertaining and playing music in several German Bands, nursing homes and local events. He was a master woodworker and created furniture and toys from all types of scraps. He also enjoyed playing cards, baking and traveling. He was on the Highland City Council when decisions were made to create Silver Lake and build the Weinheimer Community Center.

Funeral service will be at 11:00 AM on Wednesday, May 17, 2017, at Spengel-Boulanger Funeral Home in Highland, IL., with Rev. Christopher W. Hill officiating. Militarty Honors will follow at the funeral home by VFW Post 5694 and American Legion Post 439.

Private interment will be at Highland City Cemetery in Highland, IL.

Memorial contributions may be made to Shriner’s Hospitals for Children.