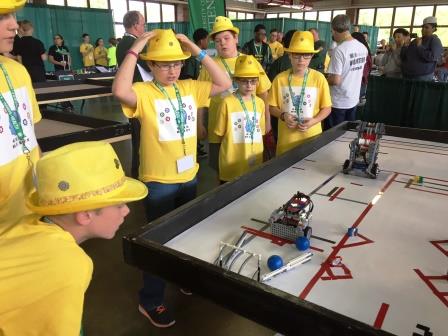 Usually, a “404” website error spells trouble, but in the case of Illinois 4-H Robotics, “Error 404 Team Name Not Found” is just one of many creative names of teams competing in the state competition held on the state fairgrounds in Springfield.

Nearly 500 youth members in 75 4-H clubs competed in “Healthbot,” the 2017 state 4-H robotics contest held May 6. Many clubs, such as the Broccoli Bots, Fabulous Pineapple Chimps, and Pineapple Power, took their team name from the contest’s healthy living theme.

“Healthbot” encouraged clubs to design robots that simulated healthy tasks, such as filling a plate with fruits and vegetables or exercising, said Keith Jacobs, University of Illinois Extension 4-H STEM specialist who coordinated the contest. 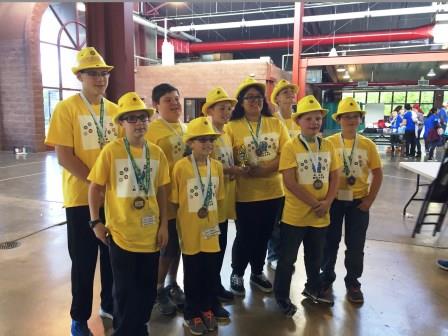 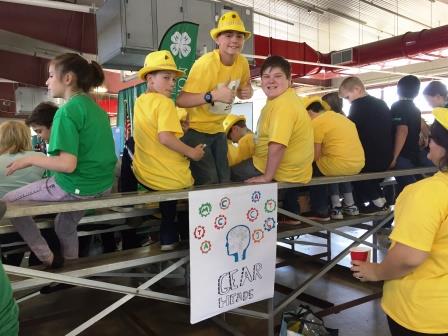 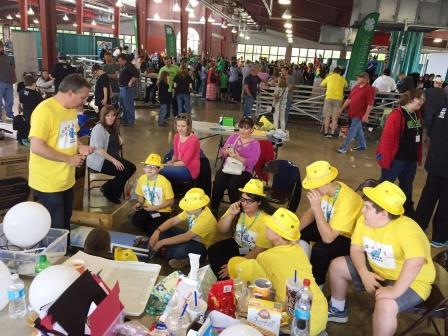 Members of the “Awesome 2.0” 4-H Club of Kendall County met the challenge by programming their robot to select healthy foods based on the color of the food package. Using sensors, the robot avoided “bad” food packaged in red wrappers and chose, instead, healthy food wrapped in green or yellow packages. The club earned reserve champion in the advanced division.

Programming success is only part of a club’s final score. “Robotics is all about ‘co-opertition,’ said Jacobs. He describes the word as a healthy balance of cooperation and competition. “The competition encourages youth to work hard, but cooperating with your teammates and other competitors is more important than winning.”

A large part of the scoring, in fact, is based on how well the team members interact and work together on a team challenge unknown to the participants until they arrive for judging. “Figuring out the challenge isn’t the goal,” Jacobs said. “Working together to consider the options earns the highest points.”

The robotics challenge mimics real work environments in the technology field. Teamwork and problem solving are important skills in the workplace, Jacobs said, and 4-H provides the perfect training ground. Of course, just as in real life, it’s important the robot does what it’s supposed to do, so performance on the competition tables also figures heavily into the day’s events.

Once the challenge was revealed, clubs worked for weeks to build and program robots which would earn as many points as possible during a timed 3-minute run. Clubs also received credit for their creativity in designing the playing field mat on which the robots perform. Clubs take three attempts at their table runs and make changes after each run to improve on their previous score.

“This type of problem-solving thinking in a short time frame builds competence and confidence in the youth they’ll need for future careers,” Jacobs said.

Robotics was the first exposure to 4-H for many of these science-minded youth. They soon learn that 4-H has many things to offer in addition to 4-H, said Jacobs.

“4-H is an amazing chance to learn new things about this world we live in and an opportunity to make new friends,” said second-year member Aisling Kerr of DuPage County.

For 14-year-old Leticia Gates of the Robotic Rovers in McHenry County, 4-H is “a way to get away from stresses and relax with something I like to do.”

“4-H has been a great way to grow my communication and problem-solving skills,” said John Haskins, 17-year-old member of two clubs, the 4-H Robostorm Club and the Decatur Eagles 4-H Club. “It’s also expanded my artistic creativity and my involvement in the community,” Haskins said.

“4-H embraces every child’s unique talents,” said Lisa Diaz, U of I Extension Assistant Dean and 4-H Director, something echoed by 11-year-old Raymond Burrage of Kane County who said, “4-H is where I can be myself.”

Holly Yee is a school educator in Kane County. “4-H has provided my students with experience that stretched their minds beyond the classroom,” Yee said. “These friendships will last beyond their teen years.”

In addition to competition, the Zip Tie Fighters, an advanced 4-H robotics club from Macon County, demonstrated its advanced robots to the young peers attending the event.

Competing from Clinton County County were the Gear Heads (Wesclin School) and the Robonators. The Gear Heads received the Programming Award in Level 2.