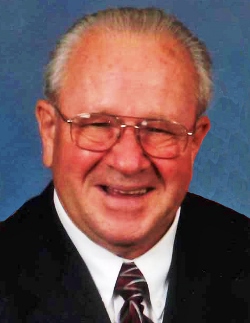 Mr. Thacker was born on September 13, 1937, in Johnson County, Illinois near Vienna, to Wallace and Gladys (Sloan) Thacker. In 1961, Cecil met and married the love of his life, Bonnie Lou Tull. They were married at the Belknap Methodist Church on July 22, 1961.

After graduating from Vienna High School in 1954, Cecil worked in factories, as a bricklayer, and eventually as a partner in the Hollis Tull Lumber Co. They cleared the timber from the land that would eventually become Carlyle Lake. Following his ownership of the lumber company, Cecil purchased a semi-truck and drove for various trucking companies for 30 years until his retirement in 2006. After his retirement, Mr. Thacker drove a bus for Community Link.

Cecil was a gentle spirit and loved to meet new people. He loved to ride his motorcycle and followed the St. Louis Cardinals and stock car racing. Cecil gave his heart to Jesus many years ago and was a member of the New Life Christian Center in Trenton.

Cecil Thacker is survived by his wife of 55 years – Bonnie Thacker of Breese; 2 sons – Tim Thacker and wife Becky of Millersburg and Scott Thacker and wife Deborah of Savannah, Georgia; 3 grandsons – Chris Thacker and wife Jessica of Belleville, Justin Thacker of St. Louis, and Preston Thacker of Savannah; a great grandson – Mason Thacker of Belleville; 4 step-grandchildren – Brett, Caleb, Megan, and Mickail; and 10 step-great-grandchildren. He is also survived by 2 sisters – Norma Jean Akin of Garfield, New Jersey and Ruth Ann Mathus and husband Stanley of Vienna; a brother in law – Hollis Tull and wife Ruthie of Carlyle; and several nieces and nephews.

He was preceded in death by his parents – Wallace and Gladys Thacker, and a granddaughter – Gera Nicole Thacker.