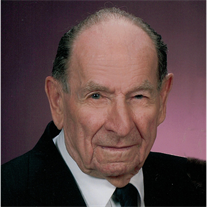 Clarence was born and raised in rural Pocahontas, IL. He served with the US Army Air Corps during World War II and was in the first wave of troops with the Big Red One (member of the First Division) on Omaha Beach on D-Day (June 6, 1944). He received a Purple Heart with an Oak Leaf Cluster for the D-Day invasion; he had also received a Purple Heart for the invasion of Sicily in July 1943. He also received a Bronze Arrowhead for the D-Day invasion.

After his marriage, he and his wife lived in New Douglas, Sorento and Staunton, IL. He and his second wife lived in Edwardsville for many years. Clarence was a truck driver for over 55 years. He semi-retired at age 65 in 1986 and completely retired at age 70. He enjoyed repairing things, wood working, bowling, dancing and playing cards “Pinochle”.

Memorial service will be at 11:00 AM on Thursday, June 22, 2017, at Saint Paul Lutheran Church in Hamel, IL, with Rev. William Gleason, Assistant Pastor, officiating.

Interment will be at Saint Paul Lutheran Cemetery in Hamel, IL, with Full Military Honors by the Staunton Area Veterans Honor Guard.

Memorial contributions may be made to American Cancer Society or St. Paul Lutheran Church.