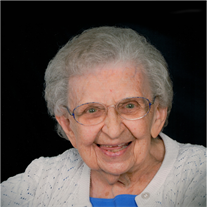 Ethel (Cenek) Bowman was born in Cicero, Illinois, near Chicago. She grew up in the neighboring suburb of Berwyn and attended Trinity High School in River Forest where she was named valedictorian of the class of 1938. She received a scholarship to Rosary College (now Dominican University) where she attended for a year before completing course work at DePaul University’s Commerce Department. Before her marriage to Richard Bowman in 1947, she worked in the accounting department of Scott, Foresman Publishers in downtown Chicago. After she was married, the couple resided in Oak Park, IL, where they raised four children before moving to Berkeley, IL, in 1973. Following Richard’s death in 1991, Ethel relocated to Highland, IL, in 1995.Ethel was a creative and curious soul who enjoyed learning new things and traveling to new places. Her hobbies included crafts, sewing, baking, reading and watching her beloved Chicago Cubs baseball team. When the family was young, they spent many summers on the shores of Lake Michigan in the town of Menominee, but, in later years, Ethel traveled more extensively to Alaska, Hawaii and Europe. Aside from her family, she felt her greatest achievement was learning to drive at age 69.

Committal services will begin at 1:00PM with interment to follow at Queen of Heaven Cemetery in Hillside, IL on June 6, 2017.

Memorial contributions may be made to Faith Countryside Homes or Highland Area Community Foundation.