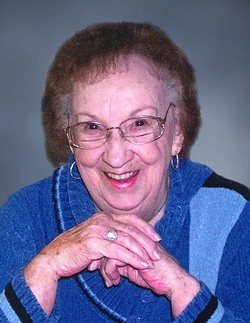 Mrs. Wade was born in Carlyle on October 18, 1927, a daughter of William Riley and Lucille (Edwards) Sanders. She married Walter Warren Wade at Scott Air Force Base Chapel on April 27, 1945, and he preceded her in death on September 24, 2006.

She was preceded in death by her parents – William and Lucille Sanders; her husband – Walter Warren Wade; a grandson – Mark Allen Beckemeyer; and a brother – William Neal Sanders.

Mrs. Wade was a bookkeeper for the United States Air Force Civil Service at Scott Air Force Base, and later at Peterson Air Force Base in Colorado Springs. She enjoyed making paintings for her family and friends and quilting with her husband. Mrs. Wade was a member of Carlyle Christian Church.

A Graveside service will be held at the Carlyle Township Cemetery at 11:00 A.M. on Saturday, June 3, 2017, with Rev. Josh Wolford, officiating. Friends and family are asked to gather at the cemetery.

Expressions of sympathy in memory of Mrs. Wade are suggested to the Carlyle Christian Church and will be received at Zieren Funeral Home. Online condolences may be sent to the family at www.zierenfuneralhome.com. Services directed by Zieren Funeral Home, Carlyle.