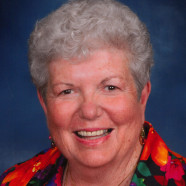 Joellen graduated from Lago High School, Aruba, N.A., and McKendree College in Lebanon, IL. She was a P.E. teacher, librarian, and an elementary educator, primarily as a fourth grade teacher at St. Rose School for 18 years. She was a member of St. John United Church of Christ, Trenton, IL.

She was preceded in death by her parents, Jean I. and Alma (Williams) Minton, and brother, Walter Minton. Also preceding her in death was her husband of 42 years, Orval Kimmle whom she married June 8, 1963 in O’Fallon, IL and died 12 years ago on July 11, 2005.

Joellen grew up as a child in Aruba where her father worked at the local refinery. She returned to the states to attend McKendree College where she met Orval. She enjoyed swimming, golfing, playing cards, bowling, traveling, reading, gardening, and camping. Joellen enjoyed her work as a librarian and proudly enjoyed being a fourth grade teacher. She was actively involved in her children and grandchildren’s activities.

Memorials may be made to St. John United Church of Christ, the Orval Kimmle Memorial Scholarship Fund at McKendree University, Michael J. Fox Foundation for Parkinson’s Research, or to the doner’s choice and will be received at the funeral home. Expressions of sympathy can be sent to mossfuneralhome.com.