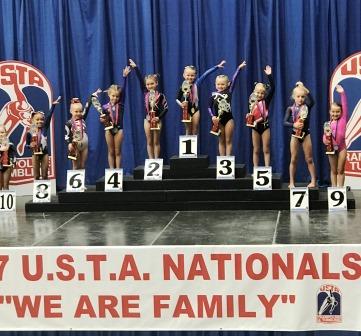 Talulla started tumbling in February 2015 and trains at Triple AAA Tumbling in Vandalia under coaches Larry and Anita Merriman.

Her parents are Tiffany Eackle and Nicholas Schlemer of Mulberry Grove. Her maternal grandparents are Greg and Jayne Tally, and Kenny and Deborah Schlemer.

Six year old Ava Knebel, daughter of Travis and Emily Knebel of Vandalia, won second place in her flight and second place overall in the Advanced Beginning Age 6 group. She was one of 20 competitors.

Ava has been tumbling at Triple AAA Tumbling since December of 2015. Her coaches are Larry and Anita Merriman and Ashley Seabright.

Nine year old Haylee Hediger, daughter of Brian and Latisa Hediger of Greenville, won National Champion in the Advanced Beginner Level for Age 9 out of 51 competitors. Haylee scored a perfect score of 10.0-10.0 and scored 10.0-9.9 on her second pass.

Haylee has been tumbling at Triple AAA since 2013 and is also coached by Larry and Anita Merriman. Her grandparents are Mary Atchison and Phineas Atchison and Debra and Harry Hediger.

As a team, the girls placed first in the Advanced Beginner Girls Group and tied with a team from Iowa.