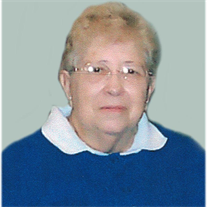 She was born July 14, 1936 in Elmo, MO the daughter of Walter and Frieda (nee Sanders) Eifert.

Martha was born and grew up in Elmo, MO. After her marriage she and her husband moved to Edwardsville and then to Marine in the late 1950’s. She lived in Marine until after her husbands death in 1996. She then moved to Highland and in 2003 she moved to Grantfork with her 2 sons. She had worked at Faith Countryside Homes in housekeeping from 1982 to the early 2000’s. She enjoyed growing flowers, jig saw puzzles, and word find puzzles.

Funeral service will be at 11:00 AM on Wednesday, June 07, 2017, at Spengel-Boulanger Funeral Home in Highland, IL., with Rev. Christopher W. Hill officiating.