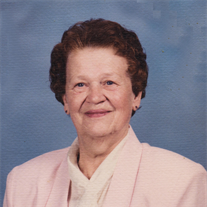 In 2002, she married Carl B. Donaldson nee who survives.

She was a member of Immanuel United Church of Christ. She was also a former member of the Immaneul UCC Women’s Guild..

Verla was born at home in Hamel Township. She attended Columbia School and after her marriage she farmed with her first husband Edward. They ran a dairy farm outside of Hamel. After her husband’s death she remarried and moved to Iberia, MO. She enjoyed growing flowers, and loved her cats and animals in general. She played the organ, and enjoyed sewing, baking and playing Bingo in Worden.

Funeral service will be at 11:00 AM on Tuesday, June 20, 2017, at Dauderman Mortuary in Alhambra, IL, with Rev. Christy Eckert, pastor, Hamel, IL, officiating.

Interment will be at Immanuel Cemetery in Hamel, IL.