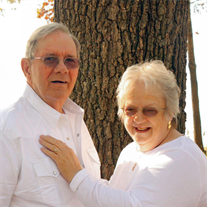 Gloria was born on Tuesday, January 7, 1941, in Highland, IL, the daughter of Harold and Hilda (nee Naab) Jackson.

She was a member of Ladies Auxiliary to St. Jacob Volunteer Fire Department.

Wayne was born in Highland and grew up in St. Jacob, IL. Briefly his family had lived in Georgia. After marriage, Mr. and Mrs. Carson lived in Highland until their first child was born and they moved to St. Jacob, IL. Wayne had worked at several different automotive garages in Collinsville before opening Carson’s Auto Repair and Gas Station. While operating Carson’s Auto Repair he also worked nights at Wentzville, MO for General Motors. He later worked at Bergman Taylor Seed Company in St. Jacob from 1977-1996. From the late 1990’s until 2004 he worked at Madison Service Company. Wayne was an avid stock car racing fan, he ran with “Tom Cat” Carson, #30, for years. He enjoyed spending time with his grandchildren.

Gloria was born at Highland, IL and attended Highland High School. After marriage, Mr. and Mrs. Carson lived in Highland until their first child was born and they moved to St. Jacob, IL. In the 1980’s, until it’s closing, Gloria worked as a seamstress at Marine Garment Factory. She was “Tom Cat” Carson’s biggest fan. She, also, enjoyed her time with her grandchildren.

Memorial service will be at 11:00 AM on Friday, June 16, 2017, at Saint Jacob United Church of Christ in Saint Jacob, IL, with Rev. Gary Kniepkamp, Pastor, officiating.

Memorial contributions for Gloria may be made to Keystone Cemetery and Highland Animal Shelter.

Memorial contributions for Wayne may be made to St. Jacob United Church of Christ and Heartland Hospice.