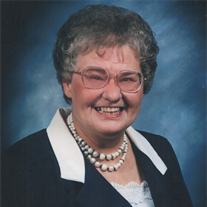 She was a member of Immanuel United Church of Christ, Hamel, IL.

She was born and raised in rural Hamel, IL, off of Hamel Drive. She graduated from Columbia School, Hamel and then Edwardsville High School in 1954. She lived most of her life at Hamel next to the family farm where she grew up. She also lived a short time in Marine and then moved back to Hamel. The last five plus years she lived at Legacy Place, Highland. She was a nurses’ aide at Hampton Nursing Home, Alhamrba, from 1974 to 1976. While working there she went to school to become a Licensed Practical Nurse. She then began working at the Madison County Nursing Home, Edwardsville, as a LPN. She worked there for 20 plus years and retired in 1997 to take care of her husband Jerry during his illness. She enjoyed sewing, needlepoint, taking care of and helping people, gardening and canning. She would often do alterations for people’s clothing, made cushions and aprons. She loved her family, children and especially her grandchildren.

Interment will be at Immanuel United Church of Christ Cemetery in Hamel, IL.

Memorial contributions may be made to Clinton County Living Center; Immanuel United Church of Christ or American Heart Assoc.