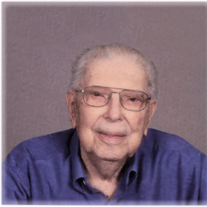 Burnell attended Quincy College for 2 years, and then St. Louis University where he earned a BS in Commerce and Finance in 1950. He joined the US Army during WWII, serving with the 63rd Combat Engineers, He had tours of duty in the European Theatre. He was commissioned as Captain in US Air Force Reserves after 15 years of service. He worked for Aeronautical Charting for 27 years and retired from US Mapping Agency in January 1980. Burnell had written a column call “Sugar Creek Wanderer” over 25 years. It started in the Highland News Leader and continues in the Shopper Review. He was an avid hunter and enjoyed fishing, gardening. He taught Hunter Saftey Education Classes at Highland Pistol & Rifle Club.

Memorial Funeral Mass will be at 10:00 AM on Tuesday, July 11, 2017, at Saint Paul Catholic Church in Highland, IL., with Rev. Father Pat G. Jakel officiating.