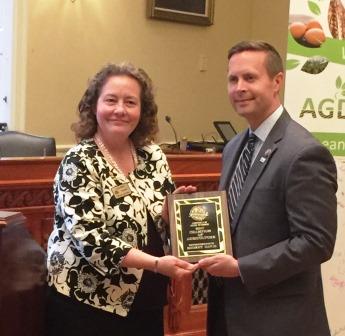 Last month, Congressman Rodney Davis, from Illinois, received the American Agri-Women (AAW) Champion of Agriculture Award during the annual AAW Fly-In in Washington D.C. Davis won this award because of his ability to solve problems and to build solutions that benefit farmers, the agricultural sector, and rural America.

Congressman Davis serves on the House Agriculture Committee. He sponsored a provision in 2014 Farm Bill for a USDA representative to serve in advisory capacity on all EPA proposals. Davis is a leader on crop insurance – preserving it as a risk management tool and providing options for coverage. He is an advocate for investing in transportation and infrastructure as well as for U.S. energy independence using both renewable fuel sources and those that are mined and refined here. Congressman Davis is a proponent of free but fair trade.

“I’m honored to receive the American Agri-Women (AAW) Champion of Agriculture Award,” said Davis. “One of my greatest privileges is being an advocate for farmers and agriculture in Congress. U.S. agriculture drives our economy and is instrumental in feeding the world. I look forward to continuing to work with my colleagues on both sides of the aisle to craft the next Farm Bill and ensure our agriculture remains an economic leader.”

Heather Hampton+Knodle of Illinois said, “Congressman Davis has been effective at representing his district and at representing agriculture. Both Agriculture Committee Chairmen with whom he has served have commended him for his leadership and ability to bring about consensus on tough issues like crop insurance and research.”

AAW President Doris Mold explained, “We are honored to recognize a true Champion of Agriculture in Representative Rodney Davis. His concern and dedication to agriculture and rural America is evident in both his words and actions.”