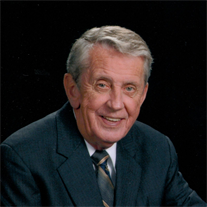 Joe was born in St. Louis, MO and graduated from Breese High School in 1952. He attended SIU-Carbondale and served with the US Air Force Reserves. From 1955 to 1990 he worked at McDonnell-Douglas in St. Louis as a Budget Analysist. Joe enjoyed playing golf and was a Ranger at Governors’s Run in Carlyle. He was a Cardinal Baseball Fan. He wintered in Florida for six years and had traveled to Hawaii, Ireland, Canada, the East and West Coasts of the United States, He was a sports enthusiast, and coached Little League for his son and watch his High School games. He especially enjoyed college basketball and March Madness. He did crossword puzzles, jigsaw puzzles, and sudoku puzzles. He followed his daughters career in Theatrical Costume and Design at theaters across the country. He loved visiting his son and grandchildren in Atlanta and Dallas.

Funeral service will be at 2:00 PM on Saturday, July 15, 2017, at Spengel-Boulanger Funeral Home in Highland, IL., with Rev. Christopher W. Hill officiating.

Memorial contributions may be made to American Lung Association for COPD Research.