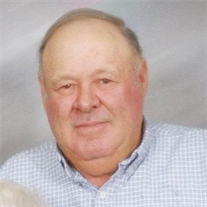 Ray Donald, the son of Ira Clell and Ida Lucille (Caulk) Bassett, was born October 8, 1933 in Old Ripley, Illinois. Ray grew up in Old Ripley and attended the public schools. He then worked for his family on the farm. On July 24, 1956 Ray served our country by enlisting in the United States Army. He served until April 23, 1958 when he was honorably discharged to go home and work on the family farm.

Ray and Waltraud (Karl) meet while he was in service in Europe. They were united in marriage on October 8, 1959 in the First Baptist Church here in Greenville. Ray continued farming his entire life. He loved spending time with his children and grandchildren. A few of Ray’s loves besides family was playing the violin, coon hunting and raising ponies in his younger years.

Ray was preceded in death by his parents, sister Anna Mae Gieseke in 1975 and a son-in-law Dale Gudgel.