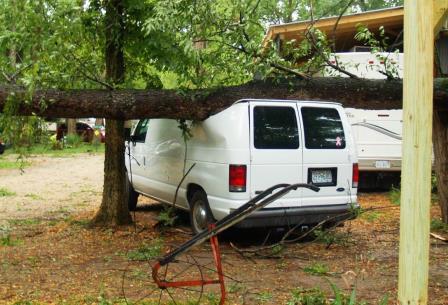 The storm that hit the area Sunday morning had linemen from Ameren Illinois and Southwestern Electric remaining busy Monday.

John Barud, Ameren’s senior director of operations, said 22,000 customers were out around the Metro East, with Godfrey and the surrounding area hardest hit. As of 10:30 Monday morning, only 3,600 customers were still without power. Ameren called in extra workers from throughout Illinois as well as Wisconsin and Tennessee. He said around 750 people were working to restore electricity.

Poles and trees were victims of the storm in Ameren’s Metro East area and Barud said Bond County experienced scattered damage and outages.

The photos in this story were taken at Timber Trails Campground. No one was injured. 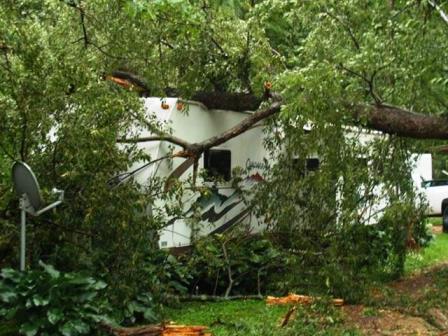 50 poles were replaced and several tree crews were called in to clean up the area.

As of 7:30 Monday morning, there were 116 Southwestern Electric Cooperative customers without power. Joe Richardson, vice president of communications, said the storm affected six of Southwestern’s 11 counties.

The cooperative expected to have power restored to all of its members by the end of the day Monday.