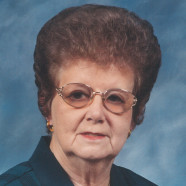 Amanda was a homemaker and a member of St. Dominic Catholic Church and Altar Sodality. She enjoyed quilting, playing bingo, but most of all spending time with her family.

Visitation will be Wednesday, August 16, 2017 from 4:00-7:00 p.m. at Moss Funeral Home in Breese.
There will be no visitation on Thursday morning prior to the funeral mass.

Memorials may be made to St. Dominic Catholic Church and will be received at the funeral home.