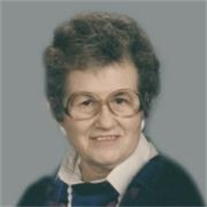 She was born on Friday, January 29, 1926, in Old Ripley, IL, the daughter of Lawrence F. and Ida E. (nee Dauderman) Kaltenbacher.

She was a member of Salem United Church of Christ and the Women’s Guild of the Church.

Dorothy was born in Old Ripley and attended Pocahontas schools. She moved to Alhambra in 1948 and attended Beauty School in Alton, IL. She owned and operated Dorothy’s Beauty Shop for over 45 years, where it was hair care and friendships. She moved to Highland in 1999 and lived at Faith Countryside Home Apartments. Her husband had owned and operated Knabel’s Blacksmith and Welding Shop in Alhambra for years. Dorothy and her husband had been on over 15 Presley tours. She enjoyed playing cards and was an excellent cook (especially her fried chicken, green beans and chocolate cookies). She loved spending time with family and friends and had a very “witty sense of humor”.

Funeral service will be at 11:00 AM on Friday, August 4, 2017, at Salem United Church of Christ in Alhambra, IL., with Rev. Jerry Amiri, Pastor, and John Mindrup, Assistant Pastor, officiating.

Interment will be at Brown Cemetery in Old Ripley, IL.

Memorial contributions may be made to Shriners Hospitals for Children; Faith Countryside Home – Activity Fund; Hospice of Southern Illinois; Charity of Donor’s Choice.