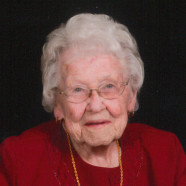 She was born November 2, 1919 in St. Rose, a daughter of the late Rudolph “Rudy” and Elizabeth “Lizzy”, nee Lager, Barth.

Mrs. Rohling formerly worked as a religion teacher at St. Mary’s Catholic Church in Trenton for 20+ years and was a homemaker. She was a member of St. Mary’s Catholic Church and Altar Sodality in Trenton where she also served as a eucharistic minister and sacristan, Poor Handmaids of Jesus Christ Associates, Daughters of Isabella Precious Blood Circle 718, charter member of St. Joseph’s Hospital Auxiliary, and a former member of the Clinton County Homemakers Extension. Betty enjoyed quilting, playing cards, cooking, baking, but most of all spending time with her children and great-grandchildren.

Memorials may be made to Mater Dei Catholic High School or to the Poor Handmaids of Jesus Christ and will be received at the funeral home.