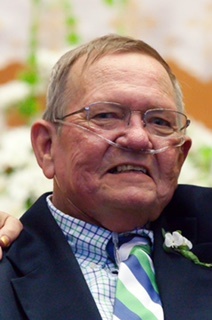 James Joseph “Jim” Todd, Jr., age 70, formerly of Greenville, passed away peacefully and surrounded by family in his home in Gravette, Arkansas on July 31, 2017.

Jim was born to Ellen and James Joseph Todd, Sr. on January 4, 1947 in Jefferson City, Missouri. On June 17, 1967 he married Paige Pinkston in Carlisle, Arkansas. They recently celebrated 50 years of marriage. He served for 24 years as Vice President of Manufacturing at DeMoulin Brothers & Company in Greenville. Jim was a loving and affectionate husband and father and an adoring grandfather and great-grandfather. Three of his grandchildren bear his name and all share his mischievous nature. He and Paige enjoyed many years traveling the world and many evenings on the porch of their “little piece of Heaven on Earth” in Gravette. Jim was a 4th degree Knight in the Knights of Columbus, was a Master Gardener, a Nashville Arkansas High School Scrapper, played baseball at Southern Arkansas University, a member of St Bernard Catholic Church in Bella Vista, Arkansas and a life-long St Louis Cardinals super-fan and baseball aficionado.

A rosary service will be held at 8:30am followed by a mass of the Resurrection at 9:00am on Thursday, August 3, 2017 at St Bernard Catholic Church in Bella Vista, Arkansas. Family will receive friends on Saturday, August 5, 2017 from 11am-1pm at Young Funeral Home in Greenville.