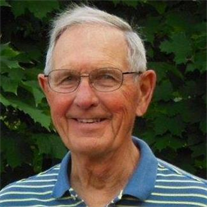 Jack was born at Highland, IL on March 8, 1939. He graduated from Highland High School in 1957 where he was Senior Class President and Co-Captain of the football team. He attended Marquette University earing a BA in 1961 and JD in 1964. Jack worked as an Assistant District Attorney for the County of Milwaukee, as a Trial Lawyer in private practice and as Staff Counsel for Aetna Casualty & Surety Company. He also served as Municipal Judge for the Village of Greendale from 1976 to 1990. After retiring from practicing law in 1999, Jack volunteered with Habitat for Humanity, helping construct or rehab countless homes in both Milwaukee and across the world. He also volunteered at the Milwaukee County Zoo.

Jack and his wife spent winters near Tampa, FL, while also traveling to many exciting destinations. Among their many adventures were zip-lining in Costa Rica, riding elephants in Thailand, building homes in Hungary, and most recently, raising the Stars-and-Stripes over the battleship USS Missouri in Pearl Harbor on December 7, 2016.

During retirement, Jack also engaged in his passion for airplanes. As a member of several radio controlled model airplane clubs, he built, flew, and unfortunately crashed countless model planes over the years

A Funeral Mass was held on Thursday, August 3, 2017 at Alphonsus Church, Greendale, Wisconsin.

Graveside Services and Interment will be held at the Spindler Family Gravesites in Highland City Cemetery, Highland, Illinois on Friday, September 1, 2017 at 9:15 A.M. with Rev. Father Pat G. Jakel, officiating.

The family is being assisted by Spengel-Boulanger Funeral Home in Highland, Illinois.