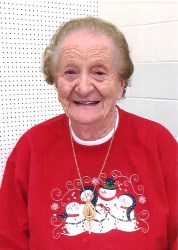 Laura Belle (Chumley) White, 94, of Coffeen, IL passed away on Wednesday, August 9, 2017, at 1:46 p.m. at her residence surrounded by her family. Funeral services will be held on Saturday, August 12, 2017 at 11:00 a.m. at Toberman-Dean Funeral Home, Coffeen, IL with Rev. Jeff Hemken, Pastor of Calvary Baptist Church, Hillsboro, officiating and assisted by Pastor Rudy Elam. Burial will be in Shiloh Cemetery, Coffeen IL. Visitation will be held on Saturday, August 12, from 9:00 a.m. – 11:00 a.m. at the funeral home.

Mrs. White was born on December 17, 1922 at rural Coffeen IL to the late Hugh and Roxie (Spears) Chumley. She married Luther White on February 18, 1939 at St. Charles MO and he has preceded in death. She was a member of Walshville Baptist Church and the Chapman Ladies Aid. Her lifetime was spent in the Coffeen area. Laura Belle was a homemaker and mother.