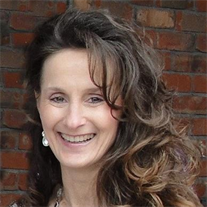 After her two year courageous battle with cancer, Marietta was called to be with her Lord. She was born in Pinckneyville, IL; grew up in DuBois, IL. She attended St. Charles Elementary School in DuBois and graduated from Nashville High School in 1984, where she was Homecoming Queen. After marriage, they followed her husband’s Aviation career from 1983 to 1990 at Scott Air Force Base, IL, Tucson, AZ and Minneapolis, MN and back to Highland in 2006. She graduated from Dakota County Technology College in Rosemont, MN as a Medical Transcriptionist in 1994. She was a Medical Transcriptionist for over 20 years at Abbott Northwest Hospital in Minneapolis, MN; then Memorial Hospital Belleville, IL for 9 years. She was a 5K, 1/2 marathon and marathon runner (including the Rock & Roll Marathon in St. Louis) often finishing in the top of her age group. Her most important achievement was being a caregiver for her parents, aunts and family. She loved her large family. She was a devoted wife for 32 years. She enjoyed fishing, camping and gardening.

Memorial contributions may be made to Highland Parks and Recreation.