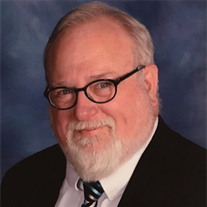 Jerry was born in Tulsa, OK and his family moved to Oklahoma City, OK and then to St. Louis, MO. He graduated from Pattonville High School in 1973. He attended UMSL. He worked for Edison Brothers and Reliable Life Insurance Co. He taught Confirmation at St. John United Church of Christ in St. Charles, MO, and that drew him to the ministry. He graduated from Eden Theological Seminary in 2006. He was Youth Pastor at St. Lucas UCC in Sunset Hills, Assistant Pastor at Zion UCC in Union, MO and Pastor of Zion-St. Paul in Bay, MO. He came to Alhambra in July 2008 and became Sr. Pastor of Salem United Church of Christ, a position he currently held. Jerry had a love for music. He performed with his guitar, wrote songs, and sang. He enjoyed reading, trivia, and travel. His family was very important to him and he loved his wife, children and grandchildren very much. His sudden and untimely death will leave a large hole in the Alhambra community and Salem United Church of Christ.

He was preceded in death by :
Mother – Frieda A. Amiri nee DeWitt

Funeral service will be at 10:00 AM on Tuesday, August 15, 2017, at Salem United Church of Christ in Alhambra, IL., with Rev. John Mindrup and Rev. Shana Johnson officiating.

Interment will be at Saint Charles Memorial Gardens in St. Charles, MO at 3:00 PM on Tuesday.

Memorial contributions may be made to Salem UCC Christian Education or Kindercottage in East St. Louis.