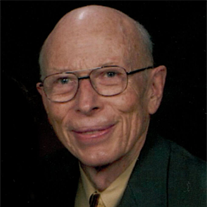 On Sunday, September 05, 1954, he married Joanne I. Klueter nee Stoerker at Saron Evangelical and Reformed Church, Linton, IN, who survives.

He was a member of Evangelical United Church of Christ, Highland, IL.

John was born in Edwardsville, IL. He graduated from Edwardsville High School (1947) and Blackburn College, Carlinville, IL (1951) he entered Eden Theological Seminary, Webster Groves, MO, in the fall of 1951. He and Joanne I. Stoerker were married in Linton, IN, on September 5, 1954.On June 5, 1955, he and Joanne both graduated from Eden Seminary and he was ordained into the Christian Ministry as an Evangelical and Reformed pastor, beginning in Ferguson, MO, as an Associate Pastor at Immanuel Church. Throughout his 60 years of ministry he served United Church of Christ congregations mainly in Illinois: Carpentersville, Sidney, Petersburg, Breese and Jamestown. From February 1985 until retirement in January 1997, he served as an intentional interim pastor with Illinois South Conference, UCC, in thirteen different situations Retirement years gave him time for many varied interests and hobbies; dabbling in recycling; gardening and documenting family stories.

Funeral service will be at 11:00 AM on Saturday, August 12, 2017, at Evangelical United Church of Christ in Highland, IL., with Rev. Christopher W. Hill, Senior Pastor, and Rev. Will Ver Duin, Assoc. Pastor, officiating.