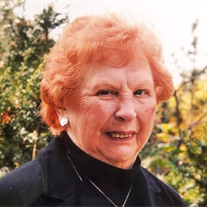 She was born to Andrew and Mary Long Frueh in Greenville, IL on Nov. 11, 1922. She married Lester W. Hediger in Bunker Hill, IL on July 6, 1953. He preceded her in death on Jan. 1, 2017. She was also preceded in death by her parents, 8 brothers, and 2 sisters who are Otis Frueh, Lewis Frueh, Albert Frueh, William Frueh, Clarence Frueh, Charles Frueh, Lawrence Frueh, Fred Frueh, Myrtle Frueh, and Lola Royer (Frueh).

She attended school about a half a mile from her parent’s Old Ripley farm. She has fond memories and told stories of her family of 11 loading up on their model T ford and traveling to see her grandparents. She enjoyed sewing, quilting and knitting. Her 2 children were in dance and she enjoyed sewing and making their costumes for them to wear.

In Ruby’s earlier years she worked as a bookkeeper at Gaffner’s garage in Greenville, nanny in Chicago, a bank teller in East Peoria, and the A&P Grocery on Main Street in Peoria. Ruby also worked as a retail assistant for over 30 years for Carsons, Famous Barr, and Macys., Ruby loved to travel to new places and experience life. She took a break from this schedule and started to babysit for her 4 grandsons and granddaughter with many lasting memories before returning to Macys and retiring in 2011. She was an avid St. Louis Cardinal Fan and rarely missed a televised game.

She enjoyed playing games with her children, grandchildren and supported them in everything they did. She was on the sidelines as their biggest fan of most of their sports which included softball, soccer, volleyball, and basketball. She always loved our family functions and being together.

She was fun loving and always enjoyed spending time with her large loving family. She truly was a gift to all that knew her and will truly be missed by all of her family and friends.

In lieu of flowers memorials may be made to the Shriners Hospitals for Children.

A funeral service will be held at Noon on Wednesday, Aug. 30, 2017 at Deiters Funeral Home and Crematory in Washington. Chaplain Steve Hoffman will officiate. Visitation will be one hour before services. Burial will be at Glendale Cemetery in Washington.