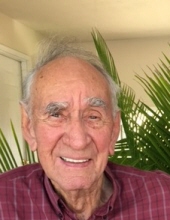 Doc was born on March 24, 1925, in Mulberry Grove, IL at the family home, to William Aaron Collier and Ella Esther Whitten. He married Delores Mae German on August 16, 1950.

He graduated from Greenville High School and joined the United States Army serving as a medic. After military service, he worked for Wade Ford, was a crop farmer and a dairy farmer, and a foreman for the Iron Workers Local 392.

Doc was an avid outdoorsman. He loved fishing, showing dogs – having had a World Champion show dog – a Coon Hound Walker, he competed in horse shows, as well, riding English saddle. He also belonged to the ‘Coffee Club’ which consisted of Skelly’s, McDonald’s, and the Sale Barn.

He is survived by: his wife, Delores; his daughters: Carolyn Hopkins of Lawrenceville, Georgia; Kathryn (Gary) Holzhauer of Pocahontas, IL; Loretta Summers of Lebanon, IN; Janet (John) Guetterman of Nightdale, North Carolina; Cheryl (Bobby) Foehner of Greenville, IL; Nancy (Jeffery) Tischhauser of Pocahontas, IL. A brother, Glen (Pat) Collier of Naples, FL and a sister, Rubie Lindley of Indianapolis, IN. He is also survived by 11 grandchildren and 15 great grandchildren, with one on the way.

Doc was preceded in death by his parents, 3 sisters and two brothers.