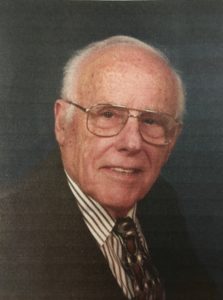 He is survived by his wife Theresa; two daughters, Jeannie Donais (husband Jerry), of Texas, and Wilda Poehler (husband Bryan) of Highland, IL. He is also survived by Granddaughter, Jaime Breinig, in Virginia and two great-grandchildren, Logan and Thomas.

Frost gave his life to his Lord and Savior at age 27. He then attended Pacific Bible College in Portland, Oregon which later became Warner Pacific College. In 1958 he became beloved pastor of Churches of God, (Anderson, Indiana) in Pendleton, Coquille and St. Helens, Oregon, Spokane, Washington and Libby, Montana.

Frost had many hobbies and held a patent for a specialty auto tool. He loved cars, was an avid reader, he played several musical instruments and became an accomplished woodworker. He built a deep sea fishing boat, grandfather clock, church additions and seven houses. He had an admirable woodworking shop where he made significant pieces of art. The family and a local museum enjoy his landscapes and still life in oils.

The family thanks you for your thoughts and prayers and requests donations be made to The Highland Home, 1600 Walnut St., Highland, IL 62249; in honor of Frost Hatch.