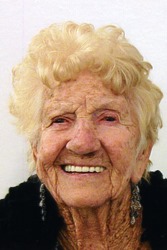 Dawn Kamm, age 93 of Greenville and formerly of Keyesport, passed away Saturday, September 2, 2017 at Hitz Memorial Home in Alhambra, IL. Funeral services will be held Friday, September 8, 2017 11 AM at Young Funeral Home. Burial will be in McKendree Chapel Cemetery. Friends may call Thursday after 5 PM and Friday from 10 AM until service time at the funeral home. Memorial contributions are suggested to Bond County Hospice, Keyesport United Methodist Church, or The Bond County Senior Center.

Dawn was born December 26, 1923 in Hamilton, New Zealand to Richard and Amy (Cochrane) Williams. She married Howard Kamm, a sailor in the United States Navy, on June 30, 1945 in Auckland, New Zealand. He died October 2, 1976. She is survived by her two children, Richard Kamm and his wife Brenda of St. Jacob, IL and Dawn Jones and her husband Robert of Greenville, IL. She is also survived by her grandchildren Monica (Steve) Martin, Stefanie (Doug) Kessinger, Kim (Kevin) Hengehold, Jason (Leslie) Jones, and Paul (Deidre) Jones along with ten great grandchildren and many nieces and nephews. She was preceded in death by her husband Howard and three siblings, May, Duncan and Richard.

Mrs. Kamm came to the United States in 1946 and resided in Granite City, IL for many years before relocating to Keyesport, IL in 1977. She retired from Owens-Illinois Corrugated Box after 32 years. She was a member of Keyesport United Methodist Church, Keyesport Beautification Committee, Royal Neighbors of America, and Keyesport Senior Citizen Center.