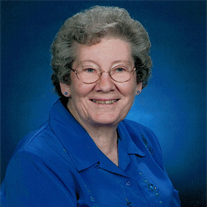 She was born December 30, 1922, in Alhambra, IL, the daughter of Walter and Helen (nee Henkhaus) Kombrink.

Delores was born and grew up in rural Alhambra. She had worked at the Shoe Factory in Highland. After her marriage she was a stay at home MOM and was very instrumental with her daughter’s activities as she grew up, as well as watching her grandchildren and great grandchildren’s sporting events. She and her husband operated a grain and livestock farm until their retirement in 1987. She enjoyed quilting and growing her vegetable garden. She canned her garden bounty and enjoyed baking. She and her husband liked dancing nearly every weekend at Lindendale Ball Room. She was really active in the Highland Evangelical United Church of Christ and United Church of Christ of Marine.

Funeral service will be at 11:00 AM on Tuesday, September 05, 2017, at United Church of Christ of Marine in Marine, IL., with Rev. Philip H. Kershner, officiating.