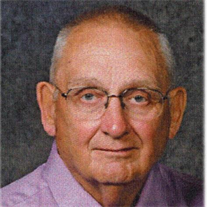 Born in Highland, IL; reared on the family farm east of Grantfork, IL. He was a 1958 graduate of Highland High School. He served with the US Army from 8/7/1958 to 5/6/1960 at Fort Lewis, Washington. He worked briefly at Highland Supply and Mobil Gas Station for several years. He then worked for the US Postal Service as a clerk, supervisor and then a post master at Gillespie and Greenville, IL. He retired at age 55. He was a Highland school bus driver for 10 years. He kept score for the Highland High School basketball team and was a chainman for the football games. He was an outstanding wrestler and refereed high school matches. He umpired little league, high school and American Legion baseball games. For several years he had s Sunday newspaper delivery route. He and his wife have been in the same Jass card club for 40 years. He had followed his grandson’s hockey and baseball games. Earl was all about any sports. He was very active in the local Highland Lion’s Club and the District level. He attended many international conventions including Korea, Hawaii and all over the US. He received many International President’s Awards. He was the sponsor for the Highland LEO Club at Highland High School and was very proud of the young people that were involved.

Funeral service will be at 10:00 AM on Monday, September 04, 2017, at Evangelical United Church of Christ in Highland, IL., with Rev. Christopher W. Hill, Senior Pastor, officiating.

Memorial contributions may be made to Highland Lion’s Club or Hoyleton Home.