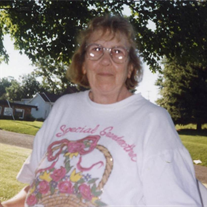 Georgia A. Lattina age 88 of Pocahotas, formerly of Murphysboro, IL. passed away at 5:10 a.m. Monday September 11, 2017 at Hitz Memorial Home in Alhambra.

Funeral services will be held at 11 a.m. Thursday, September 14, 2017 at the Donnell-Wiegand Funeral Home in Greenville with Pastor John Heston officiating. Interment will follow in Glenn Cemetery near Murphrysboro at 2:30 p.m. Thursday. The Family will receive friends from 10 a.m. Thursday until service time at the Funeral Home. For those who desire memorials may be made to Georgia’s Family.

Georgia Ann Will, the daughter of Daniel Rollie Will and Helen Ruth Bame Will was born on June 22, 1929 in Murphysboro, Il. She grew up in Murshysboro and attended the public schools there.
Georgia and Charles L. Lattina were united in marriage on September 22, 1947 in DeSoto, Illinois and enjoyed over 34 years together before his death in December 1980. They are the parents of two sons: Gerald C. “Dorie” Lattina of Springfield, MO., Edgar A. “Susan Lee” Lattina of rural Pocahontas, Illinois, three grandchildren: Andrew Luke Lattina, Daniel Dean Lattina, Michelle “Jeff” Hicks, and three great-grandchildren: Clayton, Austin, and Logan. Georgia is also survived by three brothers: Harold Will, Al Will, and Michael Will. Georgia is preceded in death by her parents, her husband Charles, five sisters: Betty, Sue, Sharon. Dorothy Jean, Peggy, and three brothers
Howard, Carl, and Jack.

Georgia raised her family, moved to Pocahontas in 1970 where she worked as a CNA in Fair Oaks, then as a care giver for the elderly in their homes.