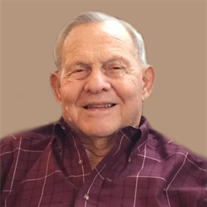 Ken was born in Highland and grew up south of Highland on the family farm. After his marriage in 1949 he worked at Wick Organ in the Cabinet Shop. He later bought a farm north of Grantfork that he and his wife operated. They also ran Key Reality and Construction Co., and Ken drove a fuel truck for Texaco. He and his wife wintered in Florida and moved to Orlando, FL for several years before returning to Highland. While in Florida he worked for Overhead Garage Door Co. and did other construction jobs. Ken loved fishing, hunting and bowling. He was very active with the Grantfork Volunteer Fire Dept.. He also liked doing wood crafts and carpentry work.

Funeral service will be at 11:00 AM on Wednesday, September 27, 2017, at Grantfork United Church of Christ in Grantfork, IL., with Rev. Tim A. Darmour-Paul officiating.